NHL Playoffs 2016 (Round 3) Countdown and Predictions 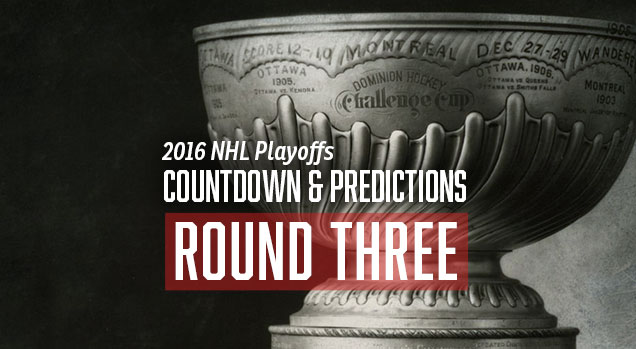 Time for the Conference Finals round. How’d it go in Round 2? Not too shabby at all. Perfect actually. 4-for-4. That brings this year’s total to 7-for-12 (after going 3-for-8 in the first round). We’re back over .500, and with only 3 more matches left, hopefully it will stay that way. 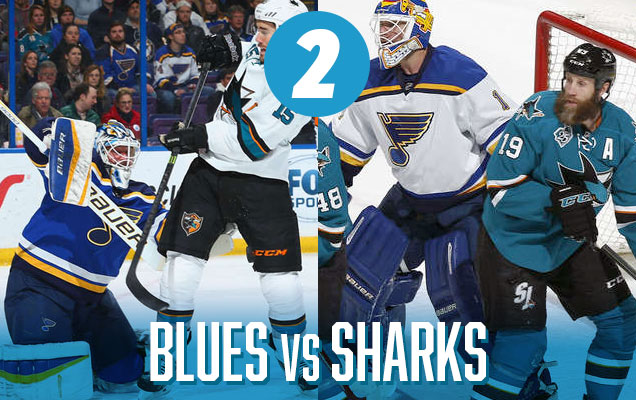 This series features two really nice individual sets of jerseys. And they work just okay against each other. The problem is having two many tones of blue involved. There’s teal, there’s royal blue and there’s navy blue. It’s just a bit too much and the addition of yellow and orange stripes aren’t helping matters either. It should be an awesome match-up hockey-wise, just not as great aesthetically.

St. Louis’ logo is one of the best in the game, but up until  their current logo and jersey design, the Blues’ visual branding has been a nightmare. The previous logo was too rounded and hokey-looking (that’s hokey, not hockey) with a mishmash of primary colours, a “St.Louis” in the logo that’s pretty much unreadable on a jersey, and then a huge double-outlined “Blues” on their logo from before that (and still with the “St. Louis” on it, making it ever harder to read). But, the concept has been there from the beginning and has been tinkered with but never changed. Also a bonus is that their current third jerseys are great. But this monstrosity that they almost wore if not for Mike Keenan (thankfully) forbidding it is absolutely unforgivable. That cost them a game right there. But still, overall, they’ve been relatively consistent in the visual branding and logo concept since their inception.

So, it’s close, but the vastly better logo has to take it. 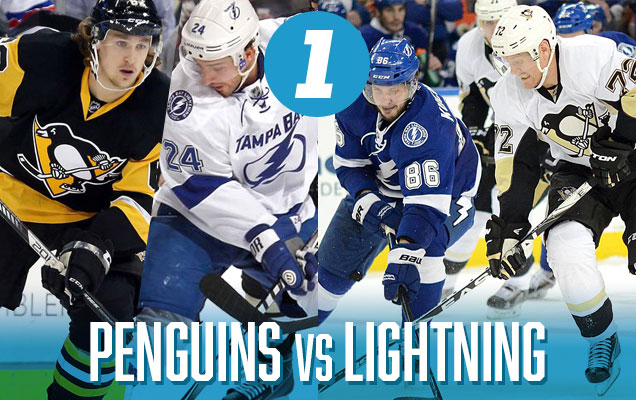 This is a really great match-up aesthetically, for a few different reasons. In Pittsburgh, you got the vintage Penguins gold-and-black against the minimalist modernism of the Lightning’s white jerseys. And in Tampa, the modern Vegas gold against the aggressively-blue Lightning home jerseys. The gold (Vegas or otherwise) looks great against the blue. And unlike their previous match-ups (Rangers and Capitals), the Penguins’ decision to have a traditional jersey at home and a more contemporary jersey for the road doesn’t hurt this match-up. The Bolts’ jersey set walks the line between being classic and modern at the same time, so the match-up will look great in either city.

As mentioned, Tampa Bay may have righted their branding ship recently, but it’s still not completely steady, particularly the overly-simplified and corporate-looking logo. And those new third jerseys are pretty inexcusable considering the superiority of their regular jerseys, and their previous third jerseys aren’t much better. And if we start diving back too far into the past, hoo boy. And their past logos have offered some pretty horrendous and illegible typography. Sure, they’ve had some on-ice success, and for a southern-US team, they’ve have a tremendous fanbase and community support, so all things considered, they have a pretty strong brand, both visually and otherwise, at this point. Their visual branding history, though, drags them down.

Agree? Disagree? Let us know in the comments or join the conversation on Twitter and Facebook! And don’t forget, we’re now on Instagram too. And check back for the Cup Finals in a couple weeks!

One Response to “NHL Playoffs 2016 (Round 3) Countdown and Predictions”