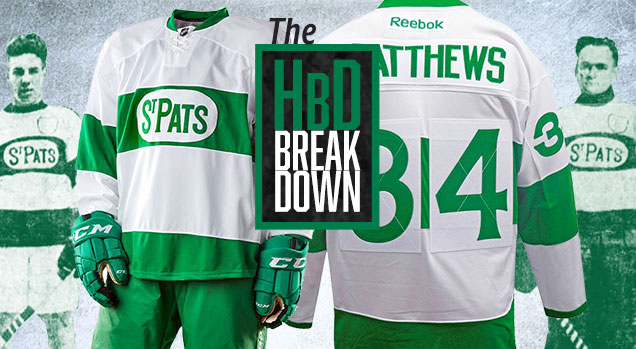 Last week, the Maple Leafs made the announcement that they’ll be wearing something special to commemorate (1) their 100th anniversary this year and (2) St. Patrick’s Day. They’re reaching over 90 years to their days as the Toronto St. Pats from 1919–27, and bringing back the jerseys they wore from the 1922–25 seasons for one game only on March 18th against the Chicago Blackhawks, one day after millions of people across North America will honour the patron saint of Ireland by drinking green beer, dressing up, and getting generally shit-faced.

They’ve done something like this once before – 15 years ago on March 2, 2002 against the Buffalo Sabres – to mark the 75th anniversary of the St Pats becoming the Maple Leafs, using instead the 1926–27 St Pats jersey. I was a strange day to pick though…two weeks before St Patrick’s Day and three weeks after Valentine’s Day, the day that they officially changed their name. So, if someone out there knows why they picked March 2 when there were two days close to it with more significance, I’d be glad to hear it.

But, regardless, the Leafs have a new (old) jersey! Let’s discuss! 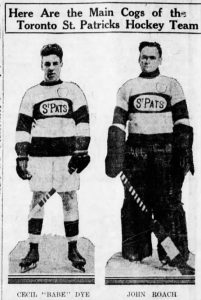 These are about as honest a replica to an old jersey as you’ll find. A solid green stripe across the chest, holding the typographic logo, with the stripes consistently duplicated on each sleeve. Then, another thick solid green stripe along the bottom of the jersey, and a green collar. Probably the only thing they could have to make these jerseys an even closer replica is to have crewneck jerseys like the St Louis Blues did at the Winter Classic in January. But Toronto went with the white laces instead. Not sure why. Because it doesn’t make much sense to not include that. But they did.

All in all, the jerseys are simple and timeless. And also one of the main historical influencers behind the design of the Leafs’ Centennial Classic jerseys from January. It worked back then and it works today…but that doesn’t automatically make it a great jersey. 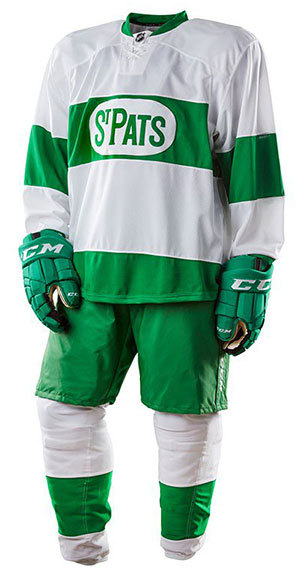 Pro tip: when you have only a single colour to work with on a jersey, that doesn’t make it easier to design…it makes it harder. You have less tools at your disposal and more restrictions to design something that’s meant to be unique and part of a team’s identity. Some restrictions are definitely good and can help the design process (contrary to what you might think, no restrictions or guidelines is a total nightmare for a designer) but if those restrictions become too confining, it makes things more challenging. Not impossible…just more challenging.

But, since these are pretty much exact replicas of jerseys from almost 100 years ago, it’s impossible to know what the design process was for these jerseys, and how heavily restricted it was by the production capabilities of the time (of if anyone even cared too much about hockey sweater design). I’d imagine straight lines and/or simplicity was in order, and these fit that bill just fine. But the St Pats weren’t the only ones wearing a single chest stripe back then, and that other jersey has become the benchmark for all other jerseys in hockey.

And the solution is really simple: an additional colour. The Habs’ look great in their bleu, blanc et rouge. The Panthers are wearing much better jerseys this year with gold, red and white. The chest stripe needs another colour, or some other elements incorporated into it, to create a really interesting jersey. Without it, it comes across as too minimal…a little bland and forgettable.

But, I don’t blame or critique the current Leafs for this at all of course. They’re just replicating an historical jersey and it’s a one-off jersey for a single game, as it should be. And they’ll still look fantastic on the ice wearing them. Well, almost.

I have to question the historical accuracy of those numbers on the back. I have no proof one way or the other if their treatment is how the original St Pats numbers were displayed, but if I had to guess, I’d say no. Which makes these giant white blocks with green numbers a faux-historical addition, and it’s not a good look.

For one, it’s too unique (which is definitely a thing) because it becomes a distraction from the jersey, making it incoherent as a whole. For two, because the green chest stripe wraps all the way around the jersey (which is almost always a good thing, and I’m looking at you Panthers), the two white blocks have a narrow green stripe between them. And while that creates a great nerdy number for Matthews (π anyone?), it’s just another distraction.

And then you get the big X over top of the numbers, which is also incredibly strange, distracting, and faux-historical. A better option would have been to (a) just not include them, or (b) do a similar treatment that the Bruins (and Habs) did for their Winter Classic jersey, with intricate stitching throughout the number. This X just looks lazy and trying too hard to be historically accurate, when it’s not at all.

I’d also wager money on that typeface for the numbers not being historically accurate, for a couple reasons.

First, remember what I said about production capabilities from 100 years ago, where straight and simple were best? Those numbers are anything but and would have caused too many problems for the hockey jersey manufacturers (whoever they were back then), which is one of the main reasons the classic hockey (and sports in general) numbers have block numbers with angled off corners (i.e. no curves) to them.  It’s only in the last 20+ years, with new and improved production capabilities, that teams have started using new number designs (for better or for worse).

Second, they’re being worn close to St Patrick’s Day, and these numbers look suspiciously like stereotypical Irish typography. Did the Toronto St Pats actually wear Irish-inspired numbers. I doubt it, but I can’t confirm because none of these people will turn around. Not even for a second.

So, it begs the question, if you’re going through all the trouble of creating a historically-accurate representation of a jersey from your franchise’s long and storied history, why would you include this obviously non-historical element that just doesn’t work?

It’s a great, historically accurate jersey that’s perfect to commemorate during the Leaf’s 100-year anniversary, and fun to incorporate into the general St Patrick’s Day festivities…until you turn the jersey around. The treatment of the numbers is different and interesting, I suppose, but it’s tries to hard to look historical without being historical, and creates a incoherent addition to an otherwise great jersey.