Nostalgia is a funny thing. Whether it’s cassette tapes making a comeback, reunion tours of bands from the past, or bizarre fashion trends coming back in style, we always seem to have this desire to revisit our comforts of the past. Nostalgia in sports is as real as anywhere, as we are always honoring past players, reviving throwback jerseys and celebrating championship teams to relive those fond memories over and over again.

On Saturday, the Leafs, who are celebrating their team’s 100-year history all season long, threw wayyy back and sported special Toronto St. Pats uniforms for their game against the Blackhawks.

Accompanying the green and white getup for Freddie Andersen was a special St. Pats mask, painted by Dave Gunnarsson. Coordinating with the throwback uniforms, the mask is also a tribute piece, honoring the late Toronto coach, Pat Quinn and Leafs’ legends of Irish descent.

Whether it’s for a throwback jersey night, a special event like the Winter Classic, or just a nod to goaltenders of the past, retro mask designs have become quite common around the NHL. Let’s take a look at some of the best nostalgic designs from recent years. 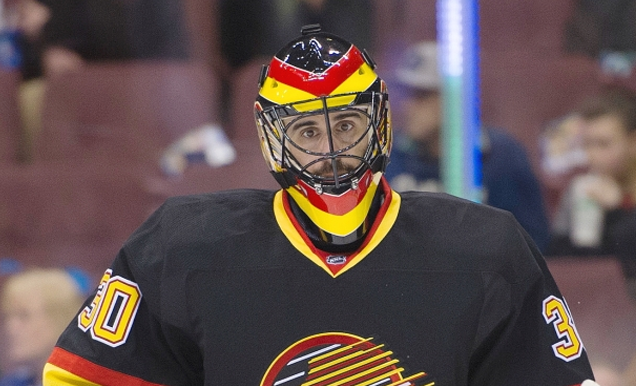 In 1997, the Canucks abandoned their black, yellow and red color scheme and spaghetti-skate logo for a brand overhaul that sent the existing aesthetic packing for good… almost. The beloved logo and jersey design made a comeback in 2016, bringing a new mask to match for goaltender, Ryan Miller.

Painted by Miller’s regular artist, Ray Bishop of Bishop Designs, the mask incorporates the Canucks’ iconic “V” shape on the front along with the skate logo featured on the coordinating jerseys on each side of the mask. The design is reminiscent in style of Kirk McLean’s mask from the early 90’s, using a bold, graphic aesthetic and paired-down composition.

While this mask doesn’t evoke memories of any one goaltender or moment in Vancouver history, the overall look and feel ties nicely into the complete nostalgia of the Canucks’ pre-millenium identity.

The runner-up of the 2016 Bucket Bracket Showdown, Matt Murray’s mask from last season has a lot of elements to love. As we covered back in June:

Murray’s mask, painted by Stephane Bergeron, is void of any text, logos or recognizable imagery, opting instead for a graphic patterned approach. The white cage blends seamlessly into the rest of the mask, which is only broken up by the four gold and black chevrons––reminiscent of Denis Herron’s––pointing inward towards the center.

The Chevrons have long been staples in Penguins’ goalie masks, with Murray’s teammate Marc-Andre Fleury even getting in on the action himself. It’s not often to see such a young goaltender use historic references on a mask, but Murray’s decision to give a nod to Herron was a smart one, especially given how sharp the bucket looks with Pittsburgh’s new jerseys. 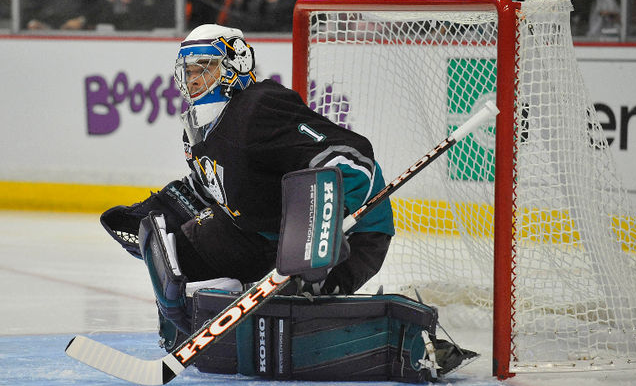 Maybe blame it on the Disney movie, but the Mighty Ducks era is one of the most nostalgia-crazed in all of sports. From the players to the logo to the teal and eggplant color palette… (), fans in Anaheim and beyond still can’t get enough of Mighty memorabilia. For the franchise’s 20th anniversary in 2013, then-Duck Jonas Hiller commissioned the mightiest of 90’s masks from Swiss artist, Alec Voggel to compliment the team’s throwback unis.

Described by The Goalie Guild as “a shining beacon of Mighty Ducks glory,” this mask has everything we loved (or maybe didn’t love) about the Mighty Ducks brand; white lacquer cage? Check. Original Mighty Ducks logo? Check. The 1995 Wild Wing duck exploding from a pool of water with his feet surrounded by ice cubes? You betcha.

For fans who have watched the progression of this franchise over its 20+ years in existence, masks and jerseys like these will surely give you all the warm and fuzzies. Is it necessarily “good design” or “smart design” by contemporary standards? Not really. But that doesn’t make us eat it up any less whenever we get the chance.

For Bruins fans and beyond, Gerry Cheevers’ stitch mask is one of, if not THE most iconic goalie mask of all time. Widely considered the first goaltender to put any kind of personalization on a mask, Cheevers’ Sharpie paved the way for the evolution of mask art into what it is today.

In 2002, Steve Shields paid tribute to the pioneer of “designed” masks with essentially a replica of Cheevers’ head in modern mask form.

The tribute was commissioned by Minnesota-based artist and airbrushing veteran Todd Miska, who has worked with Ed Belfour, Evgeni Nabakov, Mikka Kiprusoff and many more. Shields’ mask was seen as one of the first true “tribute” designs in the NHL, an idea that sparked a massive wave of throwback designs and looks inspired by goaltenders of the past.

For the Blues’ Heritage Night in 2016, Brian Elliott pulled out all the stops with an exact replica of Curtis Joseph’s musical mask from the early 90’s. “His mask when he was first here, with the two trumpets on top and the Blue Notes on the chin with the music sheet, it always stuck out in my head as a kid,” Elliott told NHL.com. “I wanted to pay tribute to him because I idolized him, and it looks cool, too.”

Elliott and artist David Arrigo took some liberties on the back plate, adding additional tributes to CuJo with his signature wolf design and a Wisconsin “W,” where both goaltenders played college hockey.

Creating an exact replica, however, was no easy task for Arrigo. “I thought doing a replica would be easy but it was so far from the truth,” the artist told Sportsnet, as he made every effort––and successfully so––to capture every detail in the original. It doesn’t get more nostalgic than going right to the source, and Ells and Arrigo did just that.