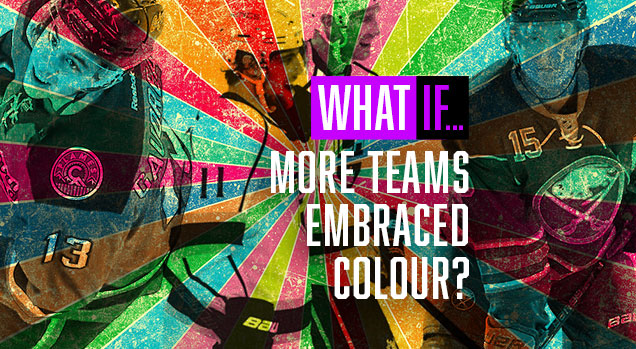 With the news that teams will not be wearing third jerseys next season because of the Adidas change-over, there are a lot of decisions to be made for most teams. This news, along with my recent employment with the Nashville Predators (Yay!) got me thinking, “This is an opportunity for teams to make the change to utilize more color!” Regular readers of Hockey by Design know how we feel about black uniforms (Hint: Not Good), the change in uniform provider could open the gate for more color to be introduced league-wide.

What if… The Kings Wore Purple?

One of the first teams that came to mind was Los Angeles, If we’re going to introduce more colors, they need to bring back their more regal colors. A nice purple uniform would be a very unique addition to the league, and would make for some great matchups. And while we’re add it, lets go back to the crown logo with a color update. 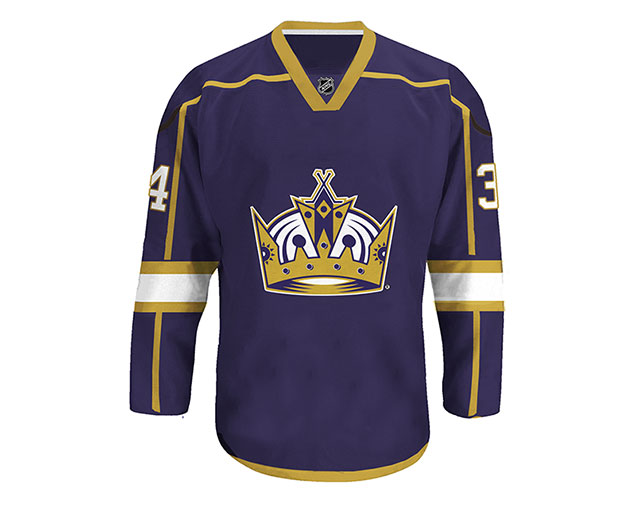 What If… Other Teams Seized This Opportunity?

There are some great uniforms in this league that show off some great color (Dallas, Philadelphia, Predators), and there are others that with some minor tweaks, could really improve.

Arizona (Who I still call Phoenix to this day): Last year the Coyotes chose to add black to their sleeves in an attempt to utilize the color in their uniforms, but that may have been overkill. The addition of black into their uniforms isn’t a bad idea, considering their previous ones only had two colors. The new uniforms introduced black gloves, pants, and sleeves, but if we remove the black from the sleeves, it gives the overall uniform more balance and creates a better hierarchy of color.

Calgary: Well the Flames have certainly had worse uniforms (and I own one of these)…The real problem is not that the Flames choose to include black in their uniforms, it’s just that, the exclusion of it looks far better on the ice, like their retro third uniforms. Just like the Oilers did, the Flames should rock these retro style jerseys, because they are full of color, look brighter, and would provide much better branding for the Flames as a whole.

Buffalo: Keeping in the theme of removing unnecessary color in uniforms… Let’s talk about the Sabres. What is with ALL THE…RANDOM…GRAY?!? It’s incredibly frustrating, because they had it right with their 1987–1996 uniforms. Bright royal would look far better than navy (think of the 2010-2012 third jersey, one of my personal favorites) and the removal of gray would simplify the jersey, making it less cluttered. They used this template in the Winter Classic which influenced them to return to the old logo/uniform set, but with some horrid tweaks.

Las Vegas: I know it’s too early to tell, but I’m really hoping that the Vegas Golden Knights (they’re official now) don’t use black as their primary jersey color. Their whole color scheme isn’t great all together, but using their grayish/greenish color, would at least be unique to the league, but the gray and gold don’t have enough contrast. I could go on and on about how disappointed I am with this branding opportunity (mostly because ownership couldn’t deviate from using “Knights” or “Hawks”… real original) but I think we’ve covered that enough on this site!

More color = more visually interesting jersey matchups. There’s a reason that the NFL has had success with the Color Rush uniforms, the fans want to see their team show off their colors proudly. With a lot of uniform changes coming up in the next season, what if… more teams embraced color?

7 Responses to “What if… More Teams Embraced Color?”