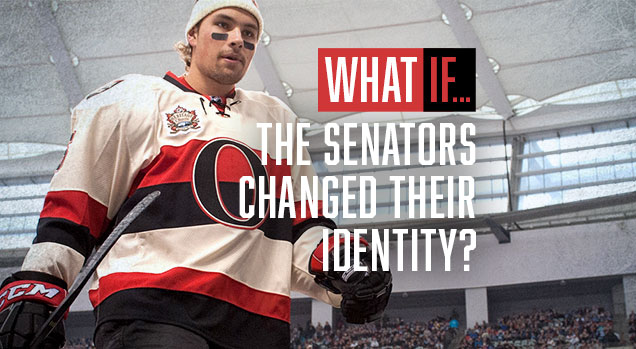 The Ottawa Senators have a rich history and have been improving their recent on-ice play, yet Hockey by Design’s 2016 NHL Brand Power Rankings ranks the Senators 23rd out of 30, and trending downward. But why? The Senators have a lot of potential in their branding, given their history, location, and recent design choices to be one of the best in the NHL. With a visual style that is lacking, it’s time for Ottawa to re-invent their brand.

What if…The Senators lost their head?

No, I don’t mean “lose their head” like Tortorella on the refs, the Senators new brand should drop the senator head logo and instead use their alternate ‘O’ logo. The Senator head logo was great for its time,  many teams in the 90’s used characters (the infamous Fisherman Gorton logo) to brand the NHL as a family entertainment venue. When the team made its return to the league, they used a two dimensional version of the senator head that worked (as opposed to what could have been). In 2007 the senator head was given some depth, keeping the design modern with the trends. But things continued to move forward and now the Senators need to take that step to improve on what they have.

The modern era of design has brought a more serious tone, depicting brand values in a more abstract manner, much like the Florida Panthers did with their recent rebrand. The Panthers old logo depicted a fierce cat with claws out and blood red eyes, an obvious depiction of the type of intensity they wanted their on-ice play to emulate. With the re-brand, they wanted to grow up, be taken more seriously. They accomplished this by giving the cat a more stern expression and establishing hierarchy to their uniform. The Senators need to learn a lesson from them. The senator head logo uses a facial expression and obvious depiction to convey their message. Switching to the “O” logo (which makes use of typeface selection, color scheme, and patterning) would bring a historical aesthetic to the branding. 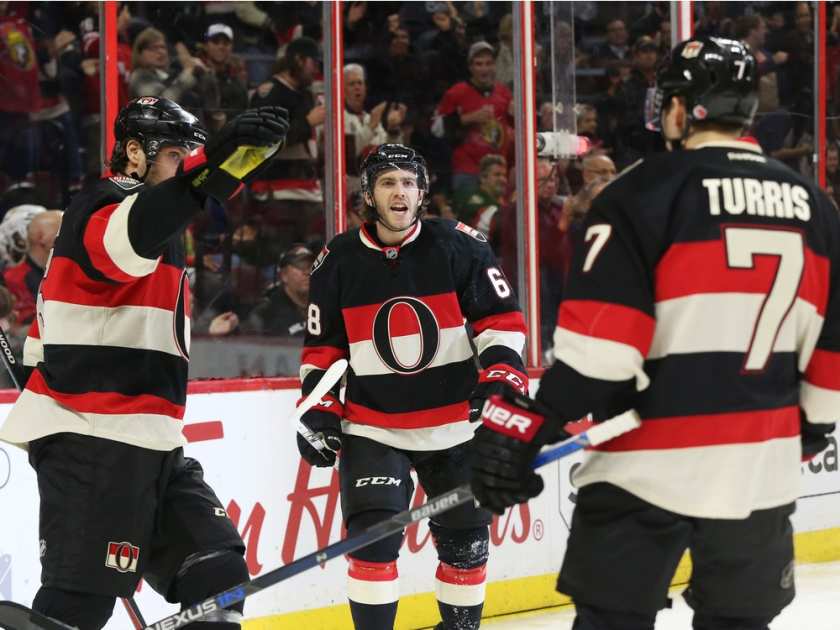 Ottawa has fallen into the category of teams that have great third jerseys that should be used as their primary (I’m looking at you Minnesota). With alternate jerseys becoming testing grounds for uniform changes, it’s time for the Sens to ditch their red jerseys in favor of their black alternates and a white version of their Heritage Classic uniforms. With the release of the Maple Leafs Centennial classic uniforms, horizontal stripes through the center of the jersey have become the new trend (although Montreal did it before it was cool).

Hockey by Design ranked Ottawa’s third as the best jersey set the Senators have ever worn, read it here: Worst to First Jerseys: Ottawa Senators. In my opinion, a good hockey jersey displays the team’s logo, establishes a clear hierarchy of color and uses striping to create a pattern and enhance the branding. These alternate uniforms have been well received and hits all of these key points for a successful uniform.

Their current uniform set features an uninteresting jersey design that was shared with the Pittsburgh Penguins until this year. I’ve already discussed the flaws in this jersey in the last What if…? Here’s a quick summary: No hierarchy of color. No pattern or striping.

The Senators brand feels disconnected between its visual aesthetic and brand values but has so much potential to enforce a strong identity that boasts their rich history while keeping their style modern.

So what if the Senators changed their identity?

9 Responses to “What if…The Senators Changed Their Identity?”