I’m a little behind the game on this one, but I was traveling last week and then was planning a hockey-for-charity event that happened on Saturday, so it’s been a little bit crazy recently. While I was busy being busy, two teams announced new jerseys, the Dallas Stars and Carolina Hurricanes. Both of them are vast improvements over their previous jerseys, but both of them had some pretty awful jerseys to begin with. 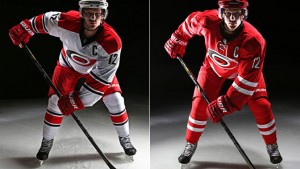 First, let’s start with the ‘Canes. As I mentioned in the post about Dallas Stars’ leaked logo, the bar for off-season redesigns in the NHL had been set, and it had been set very low. Like Arnold in Terminator 2, the ‘Canes tore that bar apart with ease. At with the lighting in the promo picture above, it looks pretty bad ass. But proper photographic lighting (and a little Photoshopping) can hide all sorts of imperfections.

As I alluded to above, these are way better than the previous jerseys, with their horrible multi-striped and cheesy hurricane-symboled trims and sleeves with unnecessary white piping along the shoulders and over-sized letters for the captain and alternates. Seriously, it’s a complete mess. But in this jersey, gone is the silver-flecked piping. Gone are hurricane symbols around the waist. Gone is the unnecessary white piping. Everything is simplified and changed to more traditional hockey aesthetics.

Very traditional, as it turns out. If you compare the Canadian national jerseys to these ‘Canes jerseys, well, they’re kind of similar. The piping is almost identical with the exceptions being the collars, a gap between the red and black stripes on the white jersey and red shoulders on the white jersey. How intentional of a rip-off this was is hard to say as it’s not like Canada had this sort of jersey piping trademarked for themselves. Teams that have similar three-stripe, two-colour piping on their jerseys include the Bruins, the Devils, the Canucks, the Oilers, just to name a few. And the Leafs share extremely similar piping (two white stripes) as well on the ‘Canes home reds. The comparison to the Canadian national team is only happening because they share exactly the same colour: red, white and  black. If their colour base was green, for example, nobody would care. It’s unfortunate, but I think the ‘Canes white jerseys are more of a rip-off of the Devils’ white jerseys than Canada’s, as they’re pretty identical except with reds and black switched.

Overall, I love the jerseys and their clean, traditional aesthetic. They’re strong, sleek and will look great on the ice. And, as a bonus, they dropped their awful black alternate jerseys. If there was one thing I could change though, it would be the red shoulders on the white jersey. I don’t think they’re really necessary. But, I’m also generally biased against any shoulder patches like that.

‘Canes fans, or hockey jersey collectors, I’d be snapping this one up. Specifically, a #12 Staal in the home reds. 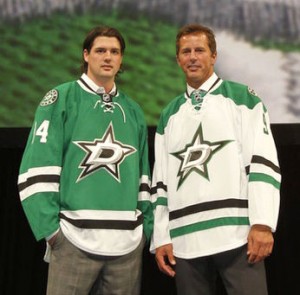 While the Stars’ new logo was a big disappointment and a missed opportunity, their new jerseys are a great balance between creating a new brand and appealing to the history of the franchise. Gone are the monochromatic, typographic-heavy black and white jerseys that relegated the main logos to a tiny shoulder patch. In its place is a unique green jersey that harkens back to the jerseys of the Minnesota North Stars, except better. It’s less olive-yellow green and more of a rich minty-cool green. This sets it apart from the darker forest green of the Minnesota Wild and makes it unique in the league. Who else in the league has a green jersey? The same amount of people who know I’m actually a highly literate and educated dog. NOBODY, that’s who.

And that’s what’s the greatest thing about this jersey. The Stars, for all their past graphic design foibles (uterus, anyone?), will finally have something to wear that’s distinctive, classy and actually doesn’t look like it’s trying to copy basketball jerseys. AND THEY ALMOST F%#&ED IT ALL UP!

According to the Stars-centric blog Defending Big D, team ownership were looking at all sorts of colour schemes, including using blue, or a red-white-blue combination. Or the 30 teams in the NHL, 17 of them use blue in their jerseys, 12 of them use it as their primary jersey colour (13 if you count the Penguins’ third jerseys). 5 of those 17 teams also use a red-white-blue colour scheme. I don’t understand why it was even considered, or why it took Mike Modano to bring them to their senses.

From the afore-mentioned blog post: “Blue, especially the shade of blue they were considering, would have been very unique in the NHL and would have tied the franchise to the other sports teams in the Dallas area.” I’m guessing they meant a royal blue, like the Cowboys and the Mavericks? Or a royal blue like the Maple Leafs and Lightning and Canucks and Rangers and Oilers? Obviously, not THAT royal blue. #facepalm

But, luckily, with these jerseys straddle that line between a new look and an homage to the franchise overall. The green stays, and some nice simple piping brings back some clean traditional hockey-jersey aesthetics. The home greens remind me of the Blackhawks’ home reds, and that’s never a bad jersey to imitate.

Again, a huge improvement over their previous jerseys (which was easy), but again with coloured shoulder patches on the white jerseys! At least it’s a simple patch of colour, but like the ‘Canes jersey, not totally necessary.

Now, if they could just do something about that logo…