Believe it or not, a lot more went down yesterday than just a Boston Bruins implosion. There were a few new jersey announcements made, so let’s just jump right in…

The Coyotes accidentally leaked a video still image (above, courtesy of @RoccoJ95) on their website before their planned announcement at 3pm PDT. And if the overall response to the leak is any indication, it might have been a good idea to just cancel the announcement altogether. And in this case, I have no intention of arguing with popular opinion. These are not good.

It’s a classic case of trying to fix with isn’t broken. The Coyotes had what was one of the best and more unique jersey sets in the league, eschewing their crazily patterned kachina-style originals with the simplicity of a red sand and white colour palette, with a new refined logo and classy jersey design. It was great. It was fantastic. And now it’s ruined forever.

The most obvious and dramatic change is the sleeves, where they added in multiple black, white and sand stripes on both the home and away jerseys. The black inclusion looks weird on the home sand-coloured jerseys, but it looks downright stupid on the road whites. The human eye is automatically drawn to places of high contrast, and the highest contrast on the jerseys are now the upper arms: the white numbers on black. And it’s only accentuated on the road whites with the black placed against a white background.

The stripes themselves? Non-sensical. Inconsistent in size, width and numbers. You can’t help but feel they’re just randomly placed, but apparently there’s a reason for it, as stated on the teams’ website:

The body of the Coyotes home and away jerseys remains unchanged but the new jerseys feature an original sleeve stripe designed to connect with Arizona’s distinctive striated landscape.

That’s a bit of stretch, and not a very good justification for including it. Striated landscapes (and yes, I had to look up that word) generally have somewhat subtle striping patterns, or different tones of the same colour. That would’ve been cool to see on a jersey. These stripes are about as unsubtle as they come. Also from the team’s site:

We wanted to maintain the classic design of our old jerseys but create a fresh new look that our fans can be proud of. The final product reflects the very best of those efforts and we are thrilled with the results.

They’ll probably be prouder of the older jerseys than these ones. Sorry guys, didn’t quite work out. 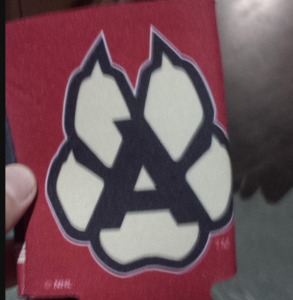 One of the shoulder patches has also changed (a new alternate logo?) to a coyote’s paw print with an “A” incorporated. They’ve used a similar idea for a patch in recent seasons, but I do like this new one: clean, simple and a little more iconic. Works for a patch or alternate logo, but wouldn’t want to see it big on the front of the jersey. The other patch, the AZ state patch to be worn on the road whites, remains relatively the same, with a typeface change to match the team’s branding, which is a good idea.

Other smaller changes include removing the sand shoulder yokes from the road whites – another bad move in my opinion – and adding a thin sand stripe along the bottom, which…whatever. I could take it or leave it. But, it makes less sense to have a black stripe on the bottom of the coloured home jerseys, since the pants are black anyway. They just kind of bleed into one another and makes the jersey look shorter than it actually is.

But, at least this helped us figure one thing out…

Coyotes: Hey, want to have a sneak peak of our new jerseys for next season?

City of Glendale: Sure, that’d be great!

City of Glendale: BREAK THE LEASE!! GET THIS TEAM OUT OF THE CITY!! 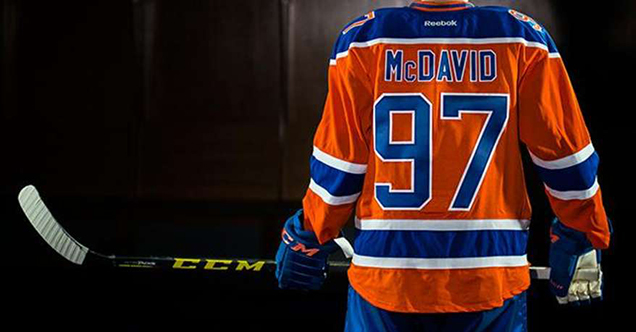 This one was a bit of a surprise, and the Oilers did a great job of keeping it on the down-low until Connor McJesus stepped up to the stage last night. The Oilers are introducing a new orange alternate jersey that they’ll wear a few times during their farewell season to Rexall Place.

It’s a call-back to their old WHA origins, and I’d love to see this thing in a game. Bright, colourful, unique. And it’s a perfect example of what a third jersey could be for any organization.

For one, it’s got obvious historical relevance, being an almost exact replica of their pre-NHL team (complete with numbers on the shoulders instead of the sleeves). Second, it’s still completely unique to the franchise (post-WHA of course), so it represents a fresh introduction to the team’s branding. And third, this thing’s unique within the NHL. Sure, there’s a couple orange jerseys out there, but none with this much blue – or any other colour – to make things more interesting. From the team’s website:

The design of the new jersey was inspired by one worn by the Oilers early in the franchise’s life as a member of the World Hockey Association. The orange jersey will be worn for seven select home games during the Farewell Season at Rexall Place, including Opening Night on Thursday, October 15 against the St. Louis Blues.

“This new orange jersey is an exciting addition to the roster of jerseys worn by the Edmonton Oilers over the last 40 years. It is both contemporary and fresh, while also paying homage to the great history of the organization,” said Oilers Entertainment Group CEO & Vice Chair Bob Nicholson.

Would I like this orange jersey as either their home and/or away jersey? Definitely not, but again, as a third jersey, it works really well.

And for a franchise in desperate need of a refresh, they now have a new GM, new coach, a new franchise centre and now a new jersey to give a visual representation to all that change. Seems there’s actually competent management in Oil Country these days. 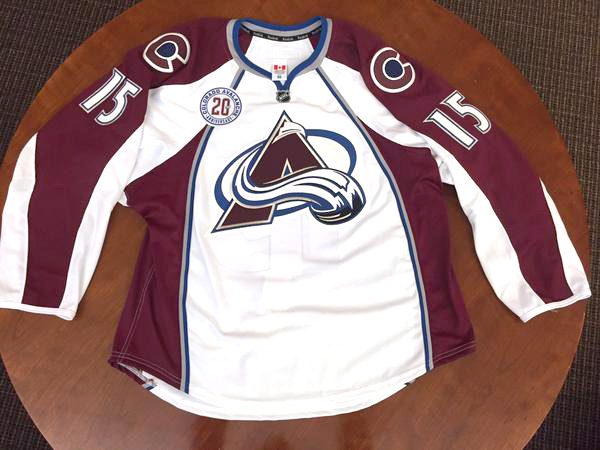 Another team making a minor splash on the jersey front today was the Avalanche, showing off the revised jerseys that they’ll be wearing in the upcoming season. The changes are pretty minor: replacing their yeti foot patch with a new Colorado-flag-inspired patch and adding a 20th anniversary patch.

First, the new C patch. I love it. It’s simple, iconic, recognizable and clearly represents the geographic location of the team. It’s also a call-back to the exact same patches that the Colorado Rockies wore back in the ’70s/’80s. It’s less cartoonish than their yeti patch and colour-matches their jersey perfectly. It’s a fantastic addition/replacement on the jersey.

The 20th anniversary patch, on the other hand, is a lot less interesting, going with the roundel logo/patch that’s all the rage with the kids these days, especially in basketball (see: Raptors, Hawks, Nets, Wizards), with a “20th” in the middle. Anniversary patches don’t need to be large glamorous logo-esque entities at all, but something a little more interesting than this would have been welcome. Especially when considering that the typeface used for the “20” isn’t the unique and somewhat iconic typeface that the Avs have become famous for. To me, that’s a no-brainer to use.

The other awful thing is that location of this 20th anniversary patch, which is placed right over the piping of the jersey, making an already oddly cluttered jersey look even more cluttered (which really won’t help with Landeskog’s C covering up the piping on the other side). To be fair, there’s not really any other place to put the patch on the jersey. But that’s more indicative of a bad jersey design than anything.

(s/t to SportsLogos.net for the images)

Yesterday morning, the Montreal Canadiens started tweeting out seeming random and extremely detailed images of their red jersey, leading to some speculation that they’ll be showing off a new jersey for the draft’s first round. I can’t imagine the Habs doing anything drastic to the most iconic sweater in the history of hockey. Not just any hockey sweater. It’s the hockey sweater.

The images they posted are incredibly micro, showing such tiny bits of sweater that it gives no sense of where on the sweater they might be and, to be honest, they didn’t seem to show anything that would be different from what they currently wear, until they had one with a touch of gold in it, as shown here.

And it turns out, the only major change they’ll be making is adding laces to their jersey for the first time since 1975, with the gold in the image showing the lacing’s holes (as shown in this image from SportsLogos.net). That’s cool, I’m down with that. I like the laces and adding them to such an iconic jersey is fantastic. But it’s not necessarily something to send teasing tweets about throughout the day.

I guess when a jersey with the Habs’ changes as little as theirs does – it hasn’t essentially changed since at least the inception on the NHL in 1917 – any change is big news. So, it’s a bit of a non-event. I imagine that will also be their Winter Classic jersey against the Bruins in January.

Some other minor changes is removing the extra stripe of blue from the collar on both jerseys to make it a solid white on both, mimicking jerseys from one of Montreal’s most prolific eras. From the team’s website:

The team’s new jersey will be similar to that first worn by the Canadiens from 1941 to 1945 and then from 1946 through 1974 – a period in which the club laid claim to 13 Stanley Cup Championships – with several notable differences. Four brass hexagonal eyelets and white laces will be reintroduced around the collar, which will also revert to pure white in color. On the team’s red home jersey, the French “LNH” logo will be stitched at the nape of the neck, an homage to the roots of the franchise and the lone exception to the “NHL” visible on all other jerseys across the League.

An LNH patch for the home jerseys, and NHL for the road jerseys. That’s a nice touch too. I’ll give it to Montreal, they generally know how to do jerseys.

Another small change, the Columbus Blue Jackets swapped out their Civil War cap patch on their primary jerseys with the logo from their alternate jerseys, recoloured to work with their primary red and navy blue colour palette. It’s a pretty minor change and there’s not too much to say about it, other than I think the alternate logo design is fantastic, and it works in these different colours too. It’s well-designed, did the roundel logo thing before it was cool, and has an authentic vintage feel to it.

My only concern is that this means the end of what was one of the nicest third jerseys in the league. No word on that, as their website seems to only have a photo gallery, which you can see here.

Minor, but the Preds showed off their jerseys that incorporate their awesome All-Star Patch on them. Seriously, All-Star Patches don’t get much better than this. I need to do an article on that thing alone.

They didn’t have an actual first round pick on Friday night, so nobody got to wear it anyway. But hey, they didn’t want to miss the jersey party I guess.


What’s your favourite new jerseys announced yesterday? Let us know in the comments below!