Remember that horribly awfully 2d vomit of an anniversary logo that the Ottawa Senators put out a few weeks ago? You know, the one that was likely designed by the best friend’s nephew’s neighbour’s aunt of someone in the Sens management who took an interior design course a few years ago so would be totally qualified to make a commemorative patch for a professional hockey team?

Well, this site certainly despised it. And it seems the Sens’ faithful, en masse, despised it as well. So much so that Silver Seven Sens (the SB Nation site dedicated to all things Ottawa Senators, and friends of this site) held a contest on their site for users to submit concepts for a new Sens 25th Anniversary patch and the fanbase voted on the winner. That winner? Jay Earle, a designer and Sens fan living in the Ottawa area. His design can be seen below. 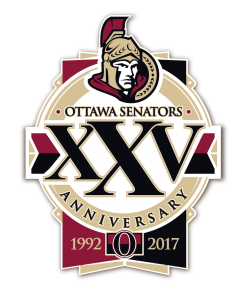 And now, Silver Seven Sens isn’t stopping there. They’re making contact with the marketing team for the Ottawa Senators to get that atrocity they created erased off the face of the earth. But not off the internet, because that’s impossible. Nothing ever goes away online.

As lovers and promoters of good design, we at HbD want to make sure this happens. So, we’re happy to share the news with our readers so that, if there’s a way to make sure that awful patch gets replaced with something better, we’re helping to make sure it happens. Here’s one caveat though. If the new patch is accepted by the Sens (or at least, it’s basic concept), than Jay Earle better get paid. We love good design, and professionals should get paid for the work they do. The Sens will be making tons of money off of anniversary jerseys/logos/patches/hats/etc, so Jay deserves to get compensated well for his work. Say No! to spec work people!

Ottawa, ON – Thousands of Ottawa Senators fans rallied to vote in a replacement for what has been widely regarded as one of the worst logos in NHL history.

SB Nation, one of the largest media brands in the world representing the interests of sports fans, launched an online contest through its Silver Seven Sens site as a response to the negative media attention and harsh criticism of Sens fans and rivals toward the official Ottawa Senators 25th Anniversary logo released on July 6.

The contest challenged Sens fans to design and vote for a new logo to replace the official logo that, according to local news authority Ottawa Citizen, offended fans, designers, the Internet, and all people “with the ability to use their eyes and look at things.”

With more than 2,000 votes and thousands more online likes, shares, and comments, the locally-initiated contest swelled into a mass online petition to urge the Sens to ditch their logo in favour of a more popular design.

“The Sens’ proposed logo missed the mark both conceptually and in execution”, said Ross Arnold, Editor of Silver Seven Sens. “However, rather than focusing on the negative, we decided to turn this into an opportunity for positive news. There are lots of creative and capable Sens fans with ideas for a better logo. The hope is that, by bringing fans together, the Sens see the value of listening to their collective voice.”

The winning logo, designed by Ottawa’s Jay Earle of Wolfworks Communications, received an overwhelming 44% of votes.

A loyal Sens fan, Earle created the new logo immediately after the Sens’ official release. It received acclamation from coast to coast. Shortly after, he entered the Silver Seven Sens logo competition.

“I saw how much bad press the logo was getting in the media and how upset the fans were so I decided to step in and create something that both fans and the organization would be proud of”, said Earle. “The response has been incredible, and many of the fans, including myself, really hope the Sens uses it as their official logo.”

We wish all the best to Jay and Silver Seven Sens in their efforts to get the anniversary patch replaced with something better. Want to see the other finalists submitted to Silver Seven Sens? Click here.