Last night, at the oddly-timed 10:30pm EST on a Tuesday night reveal, the Maple Leafs unveiled a new logo that they’ll begin using in the 2016-17 season. The concept that has served them well since being re-named Maple Leafs in 1927 hasn’t changed: it’s a blue maple leaf with “Toronto Maple Leafs” in it. And if you were expecting anything else, I could have told you that you would’ve been disappointed. A team that has as much history as Toronto does, and being one of the Original 6 franchises, they were never going to stray too far from their history…especially when all their success as a franchise is buried deep in that history. We’ll continue after the jump.

History, And Nothing But

1967…blah, blah, blah…longest non-Cup streak…blah, blah, blah…1 playoffs appearance since 2004…blah, blah, blah. We all know the jokes and that the Leafs have been the butt end of ridicule for many years now, but unless you cheer for the Habs, they still have more Cups than your team and still  lay claim to some of the most dominant teams in NHL history. Trust me, I’m no Leafs-apologist, but if you’re a franchise with a rich history of success, but nothing recently (“recent” is being used loosely here), where do you go for a rebrand and a new logo? One option is to suck as much juice out of that history as humanly possible to remind everyone (including your own fans), “Hey, we were really good at one point.”

The only really large change from that era is the logo’s colour – a slightly darker blue that’s the same as what they’ve been wearing since 1987. Otherwise, there’s only been minor modifications.

But, boy, did they ever make sure to beat you over the head with numerical symbolism. Some are great, but most are a stretch of thinking that not only beats a dead horse, but also makes the overall design suffer.

The one I really like is the 13 vein-points, representing the 13 Cup wins. It’s similar to how the Islanders have four stripes on the hockey stick in their logo to represent their 4 Cup wins, or how the old Todd McFarlane Oilers logo had 5 cogs/divets to represent their 5 Cup wins. This type of symbolism makes sense is a great and subtle design element to remind their fans of their success. There’s also a cool symbolism with the Leafs’ version since an additional Cup win (whenever that may be) will add another stem-point and give the leaf a sense of growth and vitality. Very cool.

And let’s be honest, we’re in an era in the NHL where there’s never going to be dynasties like there once were, so even if the Leafs do become a juggarnaut team, they’re not going to run out of room for additional stems anytime soon.

But, then there’s a whole fuck-load of other numerical symbolism thrown in. There’s 17 stem-points in total which symbolizes the year 1917, when the Maple Leafs came into existence as the Toronto Hockey Club/Arenas. I don’t have a problem with creating symbolism around your founding date, but it forces the existence of a design element that the logo could really do without.

The bottom leaf-vein (or butt, depending on what you see there) adds an underline to the text that is more distracting than compelling. Visually, it doesn’t add anything to the design, making the concept look more crowded and cluttered. It’s only justification for being there is (a) historic, since it’s in the original logo, and (b) to have 17 points to commemorate 1917.

Neither of these points fly because (a) you’re already making a clear connection to your history through the logo concept itself and (b) you’re forgetting about that 18th point. It could be the vein stem, but it’s styled much more like a vein point in this new version. Nobody wants to be the awkward 18th-wheel.

What happens if you remove it and adjust the other elements to compensate? The logo looks better already. 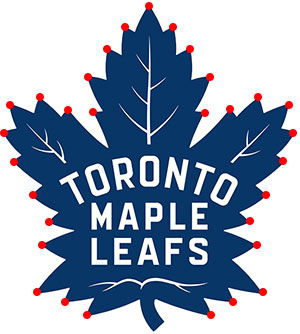 And then there’s the 31 points of the leaf itself, symbolizing the year 1931. This is where the numerical symbolism loses me and becomes non-sensical, as it’s meant to commemorate the year that Maple Leaf Gardens opened, a historic arena that they no longer play in that’s also partly a grocery store now. They didn’t win the Cup in 1931 (but they did 1932, the end of the first season in Maple Leaf Gardens), and it wasn’t their first Cup win (although, it was their first as the “Maple Leafs”).

So, yeah, there’s history and a connection to 1931, but it’s severely pushing the boundaries of relevance. Ensuring that 1931 is represented in the new logo is a bit non-sensical and my guess it was slapped on afterwards, or they were desperate to have any symbolism attached to the number of points in the leaf that they got the best one they could. The original 1939–67 logo has 35 points on it, so it was a conscious change they made.

Symbolism in a logo is great, as long as it makes sense and as long as it doesn’t impede the aesthetic quality and integrity of the logo. In the case of the 31 points, I think neither of these are true. The 11-pointed leaf logo they currently wear could be accused of being a little bit too simplified, reminiscent of the Canadian flag and not befitting a hockey team, but there’s a lot of numbers between 11 and 31 that might have worked better: still historic looking with more strength and dynamism than 11 points, but not so overly busy like 31 points.

Kern I Help You?

The typography is the only other element left to discuss. Personally, I love the typeface they’re using here: a fine balance between historic and modern. The curved “Toronto” is better than the current alternative and again has a good historic/modern balance to it.

But there’s definitely a kerning issue happening. Kerning is the spacing between the letters in a word. Good kerning is generally invisible – you won’t notice it – but bad kerning can be horrible. In the Leafs logo, there’s a discrepancy in the kerning of the different words. “Toronto” has excellent kerning, while “Maple” and “Leafs” have noticeably looser kerning – the space between the letters is larger. While it may seem that this is a minor issue, any professional designer will tell you that it will annoy them. Seriously, it’s the first thing I saw when I looked at this new logo.

Part of the discrepancy may have to do with that “Toronto” is set at a larger type size than “Maple Leafs”, so there’s a limited amount of room available under “Toronto” and above the bottom stem (which is another reason to get rid of that bottom stem). Whatever the issue was – assuming it was a problem that was addressed at some point in the process – the kerning is inconsistent and visually distracting to anyone who has an eye for this sort of thing. I’m guessing the majority of Leafs fans won’t care, but dammit, I do. It’s lazy designing. Here’s a quick Photoshop of the kerning fixed, and the bottom stem removed. Better? Better.

At the core, there is absolutely nothing new with this updated logo. It’s all slight modifications on their past, which is a little bit disappointing. I understand the sentiment of wanting to celebrate a very successful past, but the purpose of any rebranding – of turning of a new leaf (or creating a whole new one) – is to be forward-looking and re-enegerize your fan base and organization. That doesn’t happen here at all. It’s so drenched in history that the design is being dragged down by it.

That being said, it’s still a great simple concept. I spent most of this article picking apart the details, but it’s still a great logo concept that they were never going to stray from. I still like it, but it’s just not as interesting or forward-thinking as I would have liked.