NHL Playoffs 2017 (Round 2) Countdown and Predictions 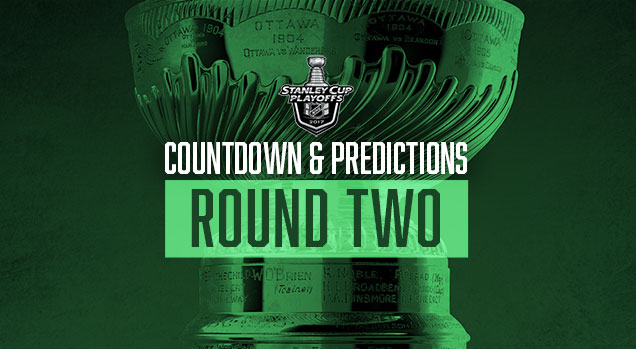 Well, not a great round for superior branding these last couple weeks, going 3-for-8. But we did call the Penguins in 5 perfectly, and there’s still lots of chances to make up for that otherwise poor showing. Let’s get to the countdown/predictions for the Division Finals.

Over the last 5 post-seasons, we’re 42-for-75, or 56% (not counting this year’s Round 1). I think we can now definitely say that good branding and design will help you win in the playoffs, right?

Okay, like last time, let’s start with the worst jersey match-up in the second round…

There’s just too much going on here. Too many stripes, too much orange (at the games in Edmonton), too little orange (at the games in Anaheim), as well as a clashing of styles between the Oilers’ more classic approach (or pre-classic, with their WHA-inspired orange jerseys), and the Ducks failed attempt at modern jersey design. For two teams that carry a colour-connection in their visual branding, it’s strange how badly these jerseys match-up against each other.

Anaheim Ducks NHL Brand Power Ranking: 24th. The Ducks, despite their recent competitiveness and 2006 Stanley Cup victory, are being destroying by their visual brand, especially their league-worst jersey set and mediocre logo. And their competitiveness may be slipping against their California cousins, or so their fans seem to think. But with a logo isn’t that great, an inexcusable past (from corporate schlepping for a bad Disney franchise and what could be the most horrendous professional hockey jersey to be worn during a game), pylon-esque Stadium Series jersey and the worst current jersey set in the league, the whole visual brand could use a re-thinking.

Edmonton Oilers NHL Brand Power Ranking: 10th. A story of extremes, Edmonton has won more Cups than the vast majority of the league, and have been absolutely terrible for the last decade, with several last-place finishes and this being their first playoff appearance since their trip to the Finals in 2006. McJesus will (and already has) helped that category, and their above-average visual brand keeps them barely in the Top 10. They have one of the better logos in the league and, despite dabbling in different colour schemes (see: navy and copper), they’ve gone back to their classic orange and blue from their glory days. Or rather, they’ve reached even further back and are ditching their home blues in favour of their alternate oranges, both in these playoffs and as regulars next season, which are not as nice as their blues, but help form a new identity for the team without having to carry the burden of Gretzky on their shoulders.

It pains be to place this match-up second-last, it really does, because these two sets of jerseys work really well together. An argument could be made for placing any of the remaining jersey match-ups in first place on this list, but there’s no ties in Bettman’s NHL, so the only thing holding this back is the clashing styles of the ultra-modern Capitals design with the more old-school Penguins design. It’s minor, but when the top 3 are this close, it’s the little things that can drop you. The games in Washington, with the heavy use of red versus gold, will look fantastic.

Washington Capitals NHL Brand Power Ranking: 12th. They haven’t been great in the past, but the current Capitals are definitely among the top contenders in the league. The fanbase is engaged, interested, and ready for most of the recent on-ice success they’ve enjoyed. Too bad the logo and jerseys don’t quite keep up that same pace. The Caps have never had what could be considered a great logo. It’s a typographical oddity now, and it was the same with the original it’s based on. The logos in-between weren’t much better (in fact, they were even worse). And while their current jerseys are the best they’ve ever had, that bar isn’t necessarily set very high either. But the Weagle, their alternative logo – a classy and well-executed design – and their 2015 Winter Classic jersey are great. 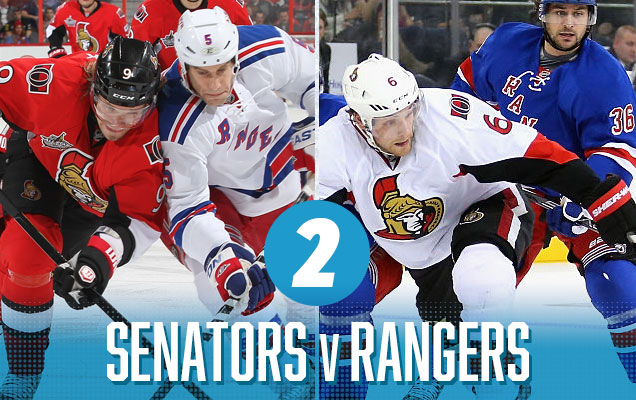 It’s hard to beat a red versus blue match-up. It’s the most used and iconic colours in almost any sports uniform design, creating a combination that looks classic and timeless, and these two jersey sets fit that bill well. Ottawa’s home reds, for all its flaws, is very red, and combined with the Rangers’ whites that have a good amount of blue in them, it looks great. The one thing keeping this match-up from greatness is Ottawa’s road whites, which are to monochromatic against the Rangers’ iconic blueshirts.

Ottawa Senators NHL Brand Power Ranking: 23rd. The lowest Canadian team, their era of on-ice success (culminating in a trip to the 2007 Cup Finals) is bookended by years of not much, getting to the Conference Finals only one other time. Their visual branding – aside from their historical third jerseys – doesn’t excite either. They have what I previously called a borderline minor-league logo and the worst logo in the league for a Canadian team, which is still an improvement over their incredibly flat and oddly shaped original logo, which is also an improvement over the typographic disaster that was the logo created for the expansion team in 1991 but never used. Now, if they actually moved to using their historical “O” jerseys full time…

New York Rangers NHL Brand Power Ranking: 7th. The Original Six teams are dominant brands in the league (with history usually comes legacy and becoming iconic). The Rangers’ net worth is miles above most of the majority of the league, and they’ve had a couple good runs lately, but the fanbase isn’t confident that’s going to continue. They’re easily the weakest of the Original Six teams. They were ranked as having the 12th best logo in the league, using a solid logo concept since the 1920s and nobody in the league save the Canadiens can match the uniqueness and iconic nature of the Rangers’ home jerseys that have stood the test of time. Often imitated, never duplicated. Their alternate logo and third jerseys are just okay, but not enough to take away from the brand overall. In short, they’re not a brand to be taken lightly. 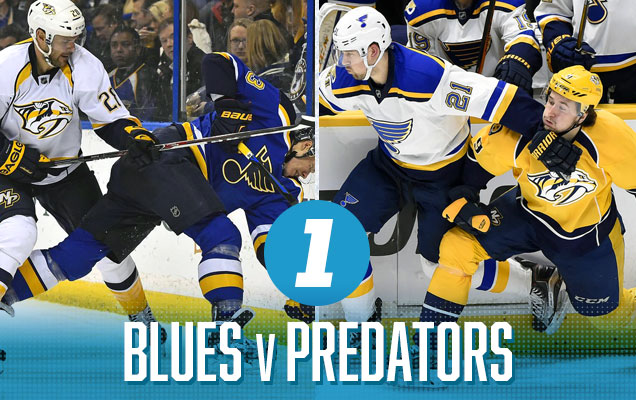 The top spot features two jerseys that both have elements of traditional jersey design mixed with contemporary jersey design with a thread of gold, white and navy running through it all to make them compliment each other almost flawlessly. The games in St Louis still feature enough gold on both jerseys to make things interesting. The games in Nashville feature enough blue to do the same. All the games will be great to watch, aesthetically-speaking. Still not sold on those gold helmets though.

St Louis Blues NHL Brand Power Ranking: 9th. Despite a relatively low net worth (the lowest of any team ranked this high), they may actually improve in that category (along with their fanbase’s dedication) with the departure of the Rams to LA. They’ve also been a contender for a few years now, and finally improved their jersey set to reflect what’s one of the best logos in the league. The Blues are also the highest-ranked non-Cup-winning team. Also, their logo is one of the best in the game, but their past visual design has been a nightmare. The previous logo was too rounded and hokey-looking (that’s hokey, not hockey) with a mishmash of primary colours, a “St.Louis” in the logo that’s pretty much unreadable on a jersey, and then a huge double-outlined “Blues” on their logo from before that (and still with the “St. Louis” on it, making it ever harder to read). But, the concept has been there from the beginning and has been tinkered with but never changed.