I think I saw this Kunitz-looking robot blink once the entire video. Man, hockey players must hate doing this shit.

This morning, the Pittsburgh Penguins unveiled the jersey they’ll be wearing for their Stadium Series matchup against the Chicago Blackhawks on March 1st at Soldier Field in Chicago. They’ve already revealed some non-revealing images which basically only showed they were going to wear their black, white and Vegas gold colours and a Stadium Series patch. Great, thanks for that. It’s nice to actually see something meaningful now. You can see the whole release and video/images here.

And it’s by far the best-looking jersey in the Stadium Series so far. I’ve always been a fan of the Penguins’ branding ever since they ditched the corporate-looking penguin logo and moved to Vegas gold, which helps differentiate themselves from another certain team that wear yellow and black. And I’m one of the few people (apparently) who really like their logo with the skating penguin. Am I biased? Not really. These jerseys are a great balance between classic jersey design and moving the conversation into innovative directions.

Keeping with the overall design of the other Stadium Series jerseys, the Pens’ entry has the shoulder yokes that are chopped off at angles (which is interesting and innovative) and the slanted numbers on the sleeves (which is incredibly stupid) and the angled sleeve stripes that don’t wrap around the entire arm (which is somewhere in between). Also, which is something that one of my readers pointed out (thanks Duff!), the logos are super-sized, living large, going big and not going home. This works for some of the teams better than others. For the Pens, it works more in their favour since their logo comes to a point at the bottom. This shape allows there to be a good amount of white space around the logo at the bottom, so it doesn’t come across as being too large. The opposite of this is the Kings, which fills up a huge amount of the jersey because it’s more of a square shape.

But it’s the detailing in these jerseys that really work. Adding the gold stripe to the shoulder yoke works well. All the stripes on the jersey, from the yoke, to the sleeves to the stripes along the bottom, are the same thickness and are consistently patterned, making the whole jersey look more cohesive. The pattern of stripes along the collar is consistent with the yoke, but is a bit thinner by necessity, so it works great. 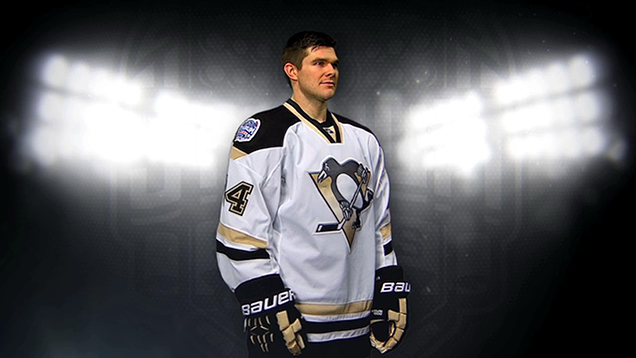 I’m also a fan of angled stripes that all the Stadium Series are using along the bottom of the jerseys. It’s something a little more innovating and dynamic, but still strong and consistent with traditional aesthetics. I’m not saying it would work for everyone, but the Stadium Series jerseys are trying out a few new things (some more successful than others) and when it works, like these Pens jerseys, it works well. Obviously, the NHL has very definite restrictions that had to be used for these jerseys (striping, shoulder yoke, etc) and the Penguins are the first ones to really use them successfully.

On the flip side, I can see why some people would complain that they don’t do enough, and it looks very similar to their current road whites. Fair enough. It would have been interesting to see a Vegas gold jersey instead of white (which would have worked against the Blackhawks since they’ll probably be wearing red). But like I said, the NHL is setting restrictions on these jerseys, and these ones are miles ahead of what Anaheim or Los Angeles came up with.

But that chrome logo…really? Slanted numbers? Bleah. But that’s more the NHL’s design issues than the Penguins’.

Agree? Disagree? Let me know in the comments…