NHL Playoffs 2014 (Round 2) Countdown and Predictions

We went 5-for-8 in the first round, including calling 3 perfectly (Habs in 4, Penguins in 6 and Rangers in 7). Not too shabby, but how will things go in Round 2?

You can see the Round 1 predictions/countdown here. But now, Round 2… 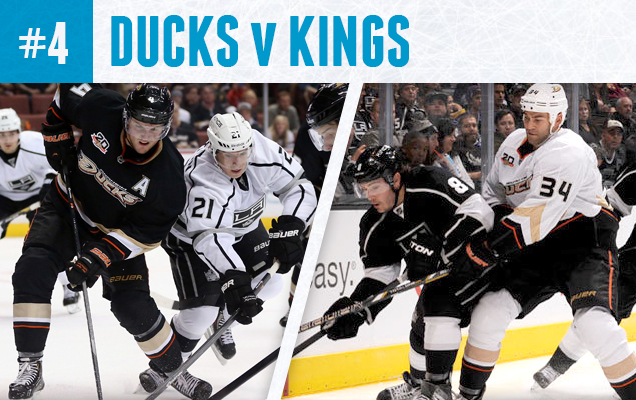 Monochromatically black Kings jerseys versus almost completely monochromatic Ducks jerseys in LA. And then monochromatically white Kings versus mostly black Ducks jerseys in Anaheim. Bleah. This will be only slightly better than the LA-San Jose series, but only because the Sharks refused to wear their teal jerseys the entire series. If they Ducks decide to wear their alternate home jerseys, it will be a little bit better, but not by much. However, if they both agree to wear their Stadium Series jerseys the entire series, well, that might be awesome by being totally awful. At least it wouldn’t be black-and-white.

Well, the Ducks were ranked 30th overall, dead last, for their logo. It’s awful. The primary reason is that it doesn’t fit on the jersey very well because of how horizontal it is. They’re using their third jersey more and more which features just the webbed-foot D, which makes a lot more sense which is getting more usage and is officially becoming their official primary logo. Great, so ditch the old one finally! But, they also have an inexcusable past, from corporate schlepping for a bad Disney franchise and what could be the most horrendous professional hockey jersey to be worn during a game. Their brand’s improving, but that Stadium Series jersey….shudder.

The Kings, meanwhile, have been retooling their logo for years. In 14 years, they’ve had 4 distinctly different logos, and each of the previous three are better than their current one, with a crown too small to make out and letters that look awful on a home plate shape. And they forced the greatest player to play the game to wear one of the worst jerseys ever created in the NHL. But, they’ve kept to their black and white motif (with flashes of a regal purple thrown in now and again, which also makes a connection to their original colours) for over 24 years, a scheme that no one else in the league has toyed with, so it’s all their own. That’s a great bonus for establishing an identity, but overall, it’s a bit of a mess with no solid future ahead, aside from their (lack of) colours. Sadly, it’s still better than the Ducks’. 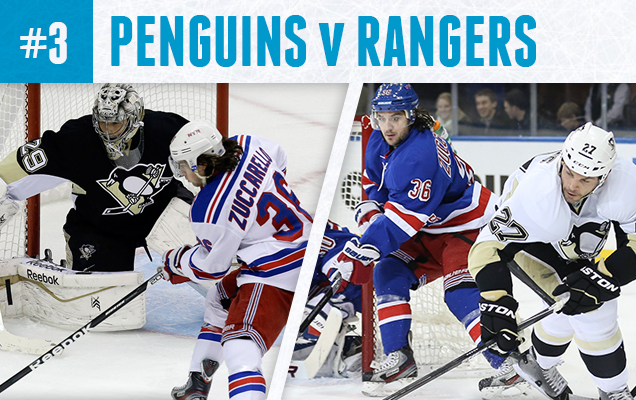 There’s a little more colour in this Penguins’ match-up than in the previous one, as the Rangers have royal blue jerseys rather than the Blue Jackets’ navy blue. It’s an improvement, especially when playing Pittsburgh who (like the Kings) have a fairly monochromatic colour scheme to their jerseys. I’ve always been a fan of their Vegas gold, as it’s classy and unique. But the Rangers downgrade the aesthetics in this match-up. Sorry Pens fans, but the Flyers have the better jerseys – or at least more aesthetically exciting jerseys on the ice. Still, Vegas gold against the Blueshirts isn’t so bad.

There was generally a lot of disagreement about ranking the Penguins logo at #6, but I’m obviously still a huge fan of it. It’s the best logo they’ve had in their history, ahead of the yellow (not gold) penguin of the ’70s – ’90s, the corporate-looking winged penguin of the ’90s, the older penguin within the thick band of text, and the original penguin who looks like he’s going to join Bonhomme at Quebec’s Winter Carnaval. But the Pens do get points for a fantastic Winter Classic jersey (but also get points taken away for a not-so-fantastic one). They’ve also been very innovative (but maddeningly inconsistent) in their jersey designs.

Meanwhile, the Rangers were ranked as having the 12th best logo in the league. The Rangers have a history of a solid logo concept since the 1920s and nobody in the league save the Canadiens can match the uniqueness and iconic nature of the Rangers’ home jerseys that have stood the test of time. Often imitated, never duplicated. Their alternate logo is just okay, but not enough to take away from the brand overall, and their jersey for the 2012 Winter Classic more than compensates. Although the Rangers haven’t enjoyed the legacy and history of on-ice success that most of the Original Six teams have had, the Blueshirts are not a brand to be messed with. 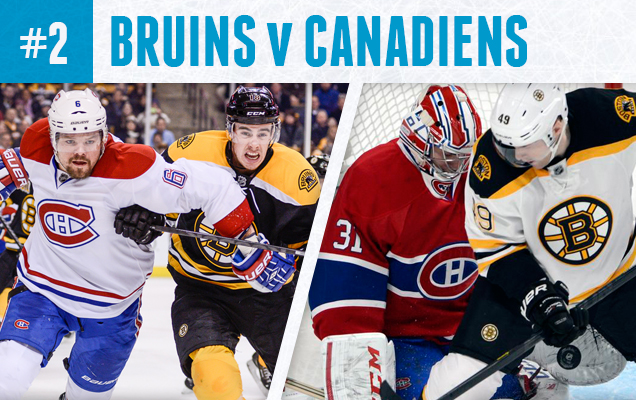 Another Original Six match-up for the Bruins, making for another classic jersey match-up again the Habs. Montreal has some of the best jerseys in the business with their iconic reds and classy (and colourful) whites. The Bruins wear their black jerseys with pride and have enough yellow splashed on there to at least make it look more interesting and not so monochromatic. This, like the Bruins-Wings and Habs-Lightning match-ups, will be an absolute pleasure to watch, regardless of the scores. Bonus: all the primary colours are represented: blue and red on the Habs, yellow on the Bruins.

The Bruins were ranked with the 2nd-best logo in the BTLNHL Countdown. It’s iconic, it’s got history and they have lived up to their brand of being the Big, Bad Bruins almost every season. They know their team, they like their style of play, and everything meshes together beautifully. When teams play the yellow and black, they know what they’re in for. They have their brand, their identity, stamped on everything. But, their big misstep is their alternative logos and jerseys over the last 40 years. From the bizarro leopard-bear of the ’70s, the smiling Smokey Bear in the ’90s and ’00s, the overly complex and oddly shaped alternative logo of today, and the “meh”-inducing logo for their Winter Classic jerseys, they’ve kind of stunk up the joint. And the alternative jersey with Smokey on it? Awful.

As big and bad as the Bruins are, they face another incredibly tough match-up against the best logo for a Canadian team in the NHL (and 5th overall). It’s a match-up against the most iconic hockey sweater in existence that has endured for almost 100 years now. The “bleu, blanc et rouge” is on par with the Yankee pinstripes and has been celebrated in book and film. It is the one jersey/logo/brand that will never change because of how iconic it has become. And it plays in the birthplace of hockey. Oh, and there’s 24 banners hanging in the rafters in Montreal that attest to a small amount of success as well. Boston may have the better logo, but they get just slightly out-matched everywhere else. 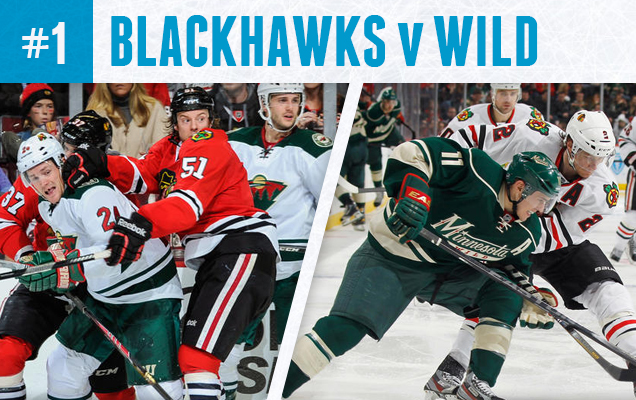 The Wild have some of the most underrated jerseys in the league. Their green third jerseys are among the best in the league. Their new road whites are the also among the best in the league. Their home reds are, well, Christmas-like, but at least they’re colourful. Mixed with a team who wears some of the best jerseys in the league with the Blackhawks, this has the makings of a great-looking match-up. On top of all that, the red vs green is another complimentary colour match-up (just how the Rangers/Flyers – blue vs orange – was last round), so with any complimentary colours what are meant to only accent each other, if you have them in amounts that are too equal to each other, they begin to clash. It will be awesome to watch.

The Blackhawks’ logo ranks at #7 in the league, which is very decent, but they also have one of the absolute best jerseys in the league, both home and away. They have history (as the logo hasn’t changed at all since 1964, and the same concept since their inception in 1926), the Madhouse on Madison, a passionate fanbase, overall high-quality design, a good Winter Classic jersey addition and Vince Vaughn on their side. Actually, scratch that last part. Vince Vaughn kind of sucks now. They had a tough go of it through the ’90s and early ’00s, with bad ownership and lack of a on-ice quality product, but overall, from a branding perspective, they’re a beast.

As for Minnesota, they have what’s the best logo out of all the expansion teams and logo redesigns that emerged during the ’90s, but that’s not setting the bar very high and only gets you ranked at #16. But, they have maintained a very consistent brand, with no logo changes and very minimal jersey changes since their inception, as well as introducing some pretty sweet third jerseys which they still wear. I’m not crazy about the Christmas-themed jerseys (Clutterbuck is actually singing the “Do you hear what I hear?” holiday carol here), but at least they’re moving away from being branded as the mind-numbingly boring team from the Lemaire years. And they have awesome new road jerseys, the best thing to come out of hockey design in 2013. But they’re in a tough fight in this round.

NHL Playoffs 2022: Round 1 Countdown and Predictions

6 Responses to “NHL Playoffs 2014 (Round 2) Countdown and Predictions”