With the Stadium Series officially beginning tonight, when the Anaheim Ducks take on the LA Kings at Dodger Stadium, it’s high time we do what we love to do here at Hockey By Design: count things down.

Overall, the Stadium Series jerseys are pretty underwhelming, and we’ve talked exhaustively about the shitty chromed-up logos, and the slanted numbers on the sleeves,  so while this countdown will certainly take these things into account, this is more about the complete package of the jerseys and how it works with the rest of the design elements on the jerseys. There are seven teams competing with special jerseys between today and March 1st, so let’s pretend we’re German and start with the wurst.

You saw this one coming, right? If you read our Top/Worst 5 of 2013 post from a couple weeks ago, you know how we feel about the Ducks’ orange uniform. There’s too few other elements  to counteract the extremeness of the orange that completely dominates the entire uniform. Even the Flyers know there’s limit to the amount of orange to put on a jersey. Cutting the sleeve stripes off was a mistake. This jersey needed the full sleeve stripes, as well as striping along the bottom of the jerseys, and maybe ever the shoulder yokes. The full orange is just too much. With black gloves and shorts, it’s getting a little Halloween-esque as well. And in case nobody has yet mentioned it, orange and beige don’t really work together. Kudos to Jonas Hiller though, for fully embracing the monstrosity of it all, by adding an orange helmet and pads to compliment these jerseys, if you can use the word ‘compliment’. If I may offer an alternate idea for the Ducks that would have been awesome? How about the jerseys from the movie they’re originally named after? Read the full assessment of the jerseys here. 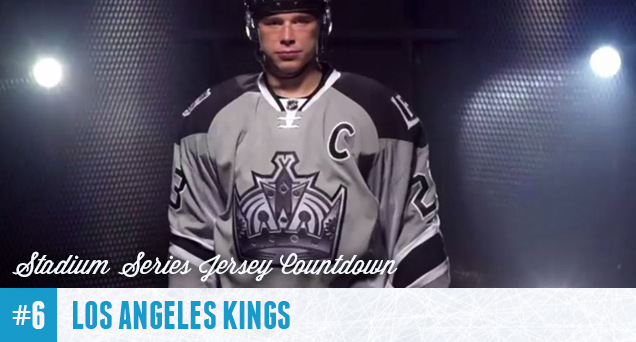 And if you just read the full assessment of the Anaheim Ducks Stadium Series jerseys, this second-to-last placement shouldn’t come as a big surprise either. Light grey just looks like dirty white. I know the Kings don’t exactly have a creative colour scheme in their current brand (or a colour, per se), but bringing back the purple and/or yellow and using them on these updated Stadium Series jersey templates might have been cool.  The “LA” shoulder patch looks good and I’m glad they used some shoulder yokes, but those are the only positives really. Damn, tonight’s Kings/Ducks game is going to look gross. Orange pyjamas versus dirty whites? Bleah. At least they’ll have beach volleyball set up to watch. Read the full assessment of the jerseys here. 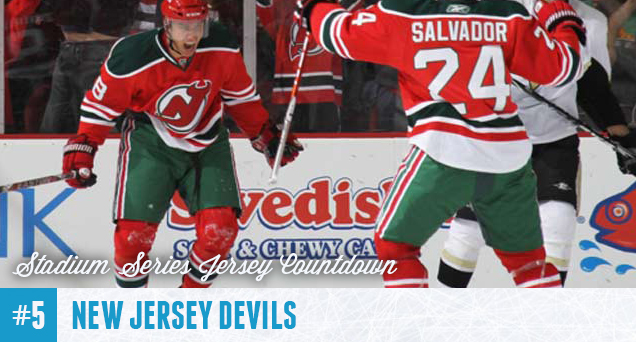 These are the only jerseys that haven’t been discussed yet on the blog, but really, there’s not much to discuss. The Devils (aka Lou Lamoriello) are extremely adverse to any sort of alternative or celebratory anything outside of their brand. They’ve changed their designs once, in 1992, going from green-and-red to black-and-red and slightly simplifying the design of their jerseys. That’s it. So, for the Stadium Series, they’re just bringing back their green-and-red jerseys, identical to what they were pre-1992 (compare above picture with this one), slap their chromed-up logo on it, and call it a day. It’s not a bad jersey necessarily (although those extra white stripes on the sleeves are weird) but there’s so little creativity or celebration of anything involved, it’s hard to get excited about it. And that pushes it down this list. 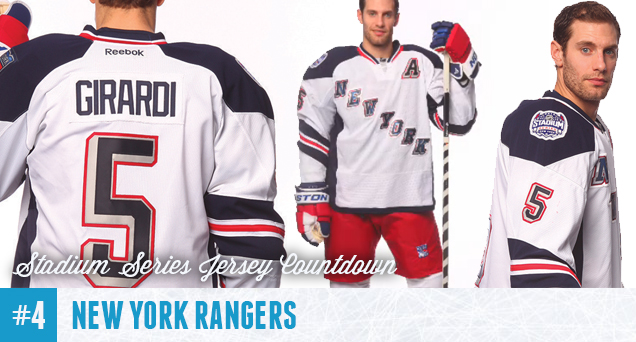 The Rangers reached back to their Gretzky days for inspiration for these jerseys, closely replicating the stripe pattern on the sleeves, collar and base of the jersey. The colours/outlines of the numbers are also the same. But they added in the shoulder yokes from the Stadium Series jersey template and, of course, switched out quadruple-outlined super-spiky Lady Liberty logo for their classic diagonal text. It’s not a horrible jersey, but the “New York” being forced to be chromed because of the league just makes it look out-of-place. The sleeve stripes are a little too complex given the relative minimalism of the rest of the jersey too and look odd because of that. There’s good and bad, so the middle-of-the-pack is a good place to put this jersey. I call it the Malcolm jersey. It’s better to just ignore it. But again, kudos to the goalie (Lundqvist is this instance) for doing something creative, like having pinstriped pads and gear to pay homage to the Yankees. Read the full assessment of the jerseys here. 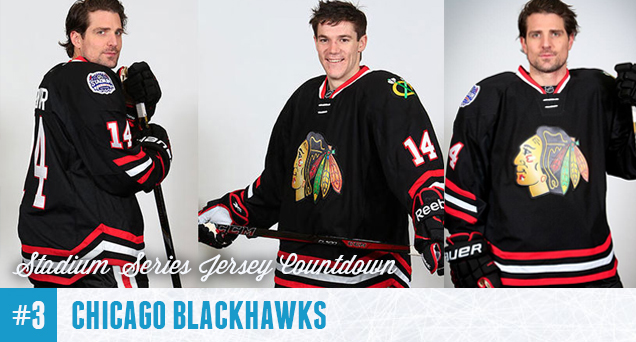 Yeah, these jerseys are pretty minimalist and cool-looking, but black?! C’mon, what is this, the late-’90s? Aren’t we over this black jersey phenomenon yet? The biggest problem with the black jerseys is that they made the chromed-up logo look incredibly cheap, because of the deep richness of the black. Against the black hair on the logo, it looks more like dark grey. In that sense, these are the worst jerseys in the whole Series in terms of working with the logo. But otherwise, they’re pretty nice. Simple but strong red and white stripes along the sleeves and bottoms to barely keep them from looking like black pyjamas (take note, Anaheim). Might have been nice to have seen red shoulder yokes on these.  Read the full assessment of the jerseys here. 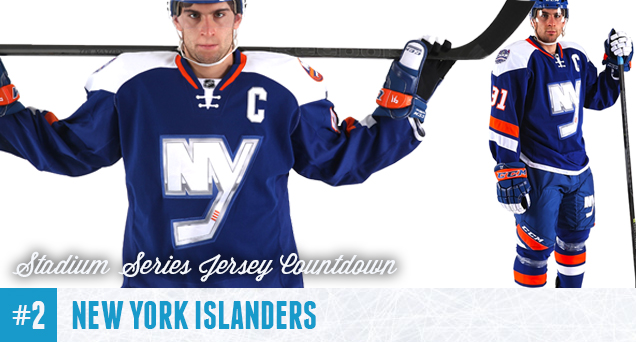 The only team to really introduce a new, or alternate, logo to the Stadium Series was the Islanders, removing everything from their current logo except for the “NY”. It makes for a more iconic, but strange and modern, logo (kind of like this Costa Rica highrise). Just needs to get rid of the chrome though. But the rest of the jersey is solid, with just enough orange to compliment the blue, and keeping the super-thick stripe pattern that the Isles have on their current jerseys, a look they’re using well. The white shoulder yokes are unexpected and stand out a little bit too much, but overall, this is a solid jersey design for something like the Stadium Series. Read the full assessment of the jerseys here. 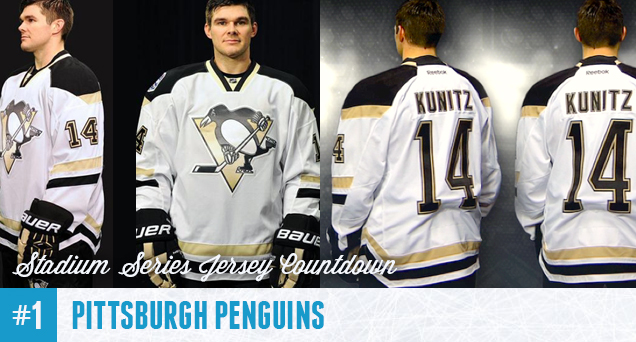 Again, if you read the Top/Worst 5 of 2013 post, this placing won’t come as any surprise. It’s the jersey that best uses the jersey template/design restrictions that were obviously given to the team by the league. Everything on it just works. The striping along the bottom works well. They knew that these stripes would work just fine if it didn’t wrap around the whole sleeve. Even adding the strip of Vegas gold to the shoulder yokes is a nice touch that compliments the rest of the jersey well. The whole thing looks classic and forward-thinking at the same time, which is what that league appears to have been going for with the Stadium Series as a whole. Easily, this one is the best of the bunch. Read the full assessment of the jerseys here.