Just a couple days ago, in a promo event at Coors Field in Denver, the Avalanche unveiled the jerseys they’ll be wearing at their Stadium Series event on February 27, 2016 against the Detroit Red Wings. As always, we’ll break these down, after the jump.

These jerseys come close on the heels of the NHL Shop-leaked (but still unconfirmed, but pretty safe to bet on considering it was the NHL that leaked them) new alternate jerseys that the Avs will be wearing this coming season. Not surprisingly, there’s lots of similarities between the two, including the prominent use of a new alternate logo mimicking the Colorado state flag‘s C with a circle in the middle (and reminiscent of the 1970s Colorado Rockies franchise). In the third jersey, the C is placed in a mountain. In the Stadium Series jerseys, there is no mountain, and that design is also used as a shoulder patch on their Avs regular home and away jerseys this season.

So, there’s a lot of jersey incestuousness happening. Not that that’s a bad thing. Consistent and relevant branding is a good thing. Plus, I’m sure George Michael and Maeby would approve. 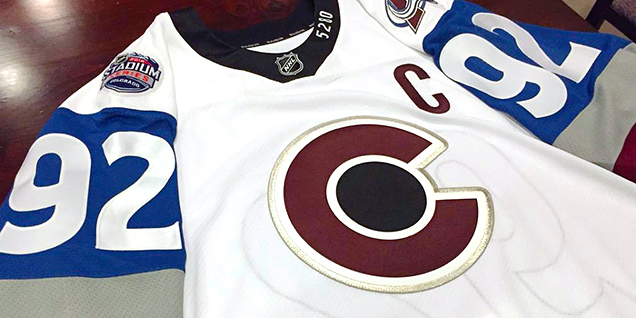 This seems to be the first year that the league is loosening its control over what the teams participating in the Stadium Series would be wearing. Or, at least, they’re loosening their restrictions on following the exact same jersey template for all the games. Although these Avs jerseys are the first to be officially unveiled, the Red Wings’ leaks look to have a sash going across the jersey.

I, for one, welcome our less restrictive design overlords. But, I’m sure the league is not giving up all control and still giving guidelines. And that would include, more than anything, simplicity to the jersey design. Last year’s lone Sharks/Kings Stadium Series match-up featured minimal lines/patterns and large design elements. The purpose, as the NHL puts it, is because of the grandeur of the stage the games are played in. It’s harder to see the players in the nosebleeds of a football/baseball stadium holding 50,000+ fans, so it was meant to help everyone watching identify the teams/players playing more clearly.

It’s sound logical, except for one issue…can anybody actually see all the details of a jersey during a regular NHL game anyway? Logo, kind of. Stripes, a bit. Jersey colour, definitely. Sleeve numbers, definitely not. While I like the idea of the jersey designs accommodating for the context of a bigger venue, that reason doesn’t necessarily hold water. Unlike buckets. Except this one.

Despite that, the minimalism in this jersey works really well. This first look at this year’s Stadium Series jerseys have eliminated some of the unnecessary elements from last year’s event, like the horizontal stripe through the middle of the jersey, for example. And the thick simple stripes on the sleeves are a really nice look and let the Avs flaunt their branded colours on an otherwise all-white jersey.

What hurts the jersey is the elimination of all striping except on the sleeve, edging it ever-so-slightly towards a practice jersey look. My suggestion? Remove the grey stripe on the sleeve and place a single stripe that’s the exact same thickness near the bottom of the jersey, but in the Avalanche blue. Here’s a mock-up of that.

They’ve also cleaned up the collar from last year, making it simpler, which is great in this context. But why black (or is it navy blue)? I know it matches the circle in the logo, but I have something to say later about that too. Instead, make that collar the Avalanche blue as well.

Spare Me the Details

The biggest missteps of the jersey are in the details – some jersey-specific some brand-specific.

About that logo. As stated earlier, it’s mimicking the Colorado state flag. In the flag’s design, the circle is yellow and represents the sun. But in this Avalanche-altered version the sun is a black hole, which doesn’t make much sense unless you’re a ‘90s grunge band. This oddity is brand-specific, as it’s duplicated in both their leaked third jersey (as navy blue) and the patch on their regular jerseys. I understand not wanting to add yellow to the brand, but maybe something a little lighter than black?

Then there’s the “5280” on the collar, which happens to be the amount of feet in a mile. Being Canadian, where the much more intuitive metric system is used to calculate these sorts of things, it didn’t make sense to me initially. But I wonder, American readers, is this general knowledge for you? Either way, when I did figure it out, I didn’t feel enlightened or amused by their clever whimsy. I rolled my eyes. “Mile High City”, got it. A bit cheesy and unnecessary. Does Denver really pride itself that much on its elevation?

But, I did find out that the 20th row in the upper deck at Coors Field would be exactly 5280 feet above sea level. So the jerseys are just lying everywhere else. 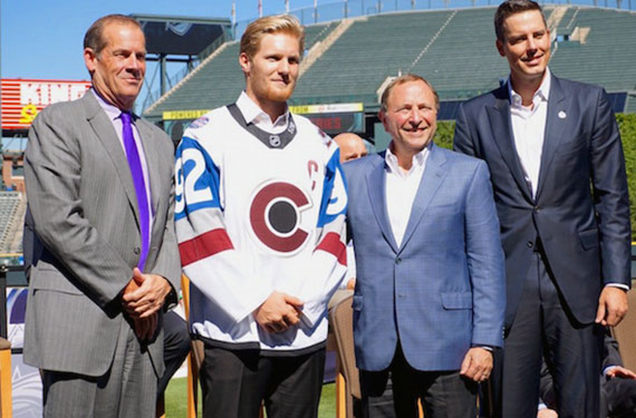 And the final detail, which you may have picked up on already throughout this post, are the gigantic numbers on the sleeves, which are bordering on comical. From year to year, they seem to keep getting bigger, like some slow-motion Hulk. Eventually, the league will finally just say “Aw, fuck it.” and replicate some football jerseys, which is what they really want to do anyway.

The thing that gets me about the numbers is that their main purpose is for the referees. Nobody, even in the lower deck, is going to be able to see those numbers clearly during game play, no matter how big they are. Nobody sees them when they’re on regular jerseys in the regular intimate hockey arenas, so why are they focusing on them for the Stadium Series? It just hurts the overall design of the jersey.

Overall, these are some pretty nice looking jerseys. Glad to see the home team wearing white (as it should be) and its clean simplicity will work well in the context of the venue, and probably some of the better Stadium Series jerseys we’ve seen yet. But those details take it slightly down a notch.

(All images from avalanche.nhl.com and Twitter.com) 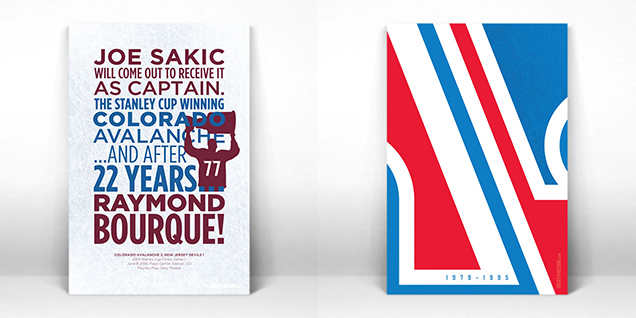 You can get your own piece of Avalanche history from the Hockey By Design Store! Get the Avs’ entry in the Play-By-Play series and Vintage series, pictured above.