The beauty of the All-Star Game jerseys is that they’re temporary, worn for only one game and then can either be recycled the following year or just forgotten completely. It’s only in the last couple decades that there’s been new designs being pumped out almost with every new ASG. Why? Because the NHL is a business that likes selling jerseys and people keep buying them. But, it also allows the jerseys to be much more trendy and rooted in the specific aesthetics of a certain era. Some are great and become timeless. Others, not so much, but today, it’s the better ones that we’ll be talking about today: the best jerseys of the worst from 60+ All-Star Games that the league has put on.

Looking for the worst All-Star jerseys? We posted that yesterday. Or read about this years version. (Also, all jersey images are compliments of the fine people over at nhluniforms.com.) 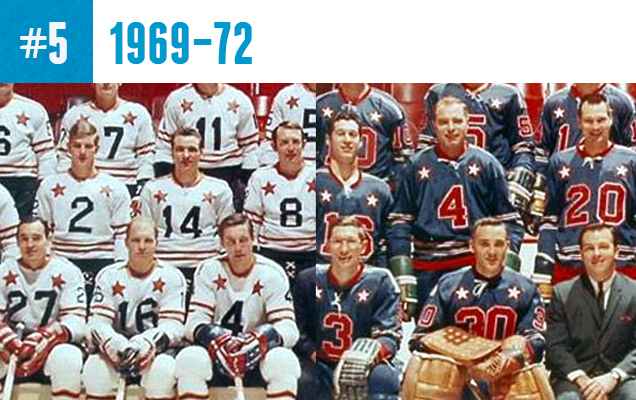 These jerseys are a great blending of (for the time) historical and modern aesthetics, drawing inspiration from the jerseys works at the 1939 Babe Siebert Memorial Game (which was basically an All-Star Game, with an all-star team playing against the Montreal Canadiens) and using more traditional striping patterns than the ASG jerseys worn from 1960–63, but mixed with more unique striping patterns than those used by the Original Six teams at the time. The blue jerseys were only introduced in 1969 when the ASG format was changed from an all-star team pitted against the previous season’s Stanley Cup champs to two teams of All-Stars pitted against each other. Not crazy about the numbers on the front, but part of me likes that better than the slapping the NHL logo on the front. 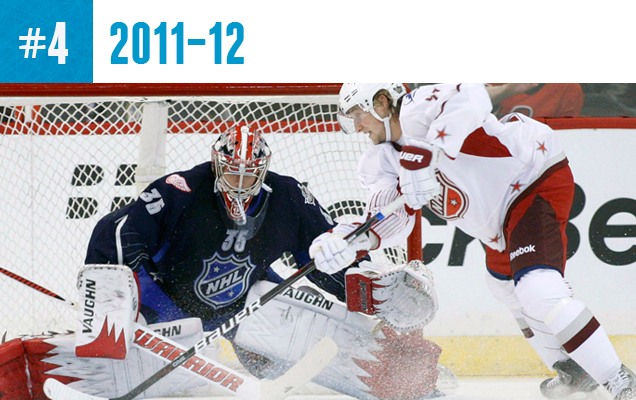 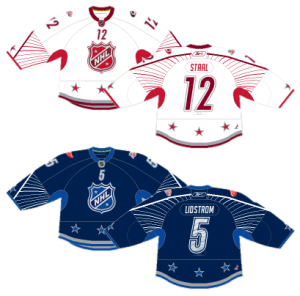 Yeah, these ones are pretty busy with a few strange decisions being made, the most obvious of which is squishing the players’ numbers on the front. There’s also the sunburst rays on the back and sleeves of the jerseys, but they kind of work here, as the stripes are thin and give some visual interest to what is otherwise a very straight-forward and minimalist jersey. Other great elements: making the NHL logo more interesting by using two tones of red/blue to give it some depth, the simple stars placed along the bottom of the jerseys, the subtle way the shoulder yoke lines curve around the sleeves from back to front, the two tones of blue on the blue jerseys. There’s a lot of subtle elements here that make a pretty cohesive and attractive jersey, and it’s trying to be innovative without being obnoxious about it. 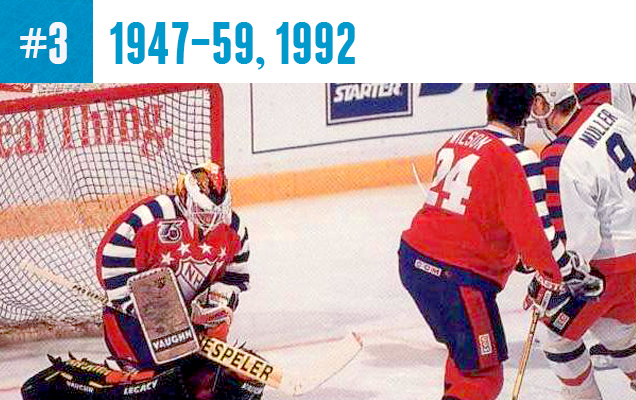 The very first official All-Star Games were played wearing these jerseys with (aside from 1951–52) an all-star team playing the Cup champions, and the jerseys were brought back for the 75th anniversary of the NHL in 1992. Personally, I love the historicity of them, with the strange striped shoulder yokes being the obvious focus of the jersey. It works because the rest of the jersey in kept extremely minimal, with only a blue/white NHL logo and a band of stars taking up any space, along with a simple blue stripe along the bottom of the jersey. It’s a great balance between simplicity and unique design elements. And apparently Drake likes them too.

The epitome of elegant simplicity, these jerseys were worn by NHL all-stars for the 1979 Challenge Cup series against the USSR, replacing the ASG that year. They may look a little boring, but there’s just something so fantastic about a classically-designed white hockey jersey, and these jerseys fit that perfectly. Simple and consistent striping, with the logo on the front. Iconic and an example of what makes hockey jersey so damn attractive. Not much else to say about them. 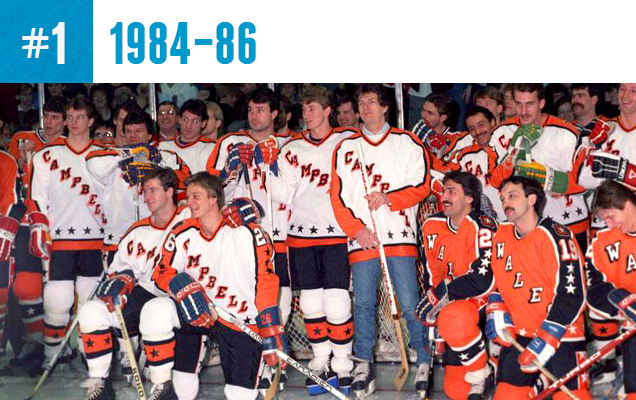 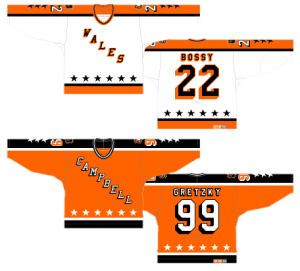 Back before the geo-specific NHL division/conference names, there were the Wales and Campbell Conferences, and the league smartly adopted the classic NY Rangers jersey styling of the cross-chest strip of lettering for both conferences (instead of creating new logos for the conferences, as they’ve done in other instances). Combine that with the orange/white/black aesthetics of the league’s logo at the time and the ’80s-era cuff-to-cuff shoulder yoke, and you’ve got a jersey that is both rooted in a specific era of design, but simple enough that it transcends its era and becomes iconic. Simple, consistent striping, awesome lettering and bold colours – an instant classic.

Agree? Disagree? What’s your favourite All-Star jersey? Let us know in the comments below.